The 2016 season saw Azerbaijan become the latest addition to the Formula One calendar, with capital city Baku playing host to the fastest street circuit in Formula One racing, on a layout designed by renowned F1 track architect Hermann Tilke.

“Our brief to Tilke Engineering was simple – create a circuit that is unique, one that will help the Grand Prix in Baku quickly establish itself as one of the most exciting, thrilling venues on the F1 calendar, and one that the fans and teams alike are excited about,” said Azad Rahimov, Azerbaijan’s Minister of Youth and Sport.

“Most importantly, we wanted a track that would showcase the best of Baku, our capital city, and I am delighted that the circuit has achieved exactly that aim.”

Tilke’s design married technical sectors with extreme straights to create a stunning circuit that also thrives on Baku’s very attractive urban atmosphere and its great combination of history and 21st century style. The historic city centre, the beautiful seaside promenade and the impressive government house all combine to provide the perfect backdrop for the spectacular track.

“Obviously street circuits present a number of challenges, in terms of circuit design, but we have been able to incorporate some unique features that will provide the teams and fans with fascinating racing,” he comments.

“For example, the extremely narrow uphill section at the old town wall rewards pinpoint accuracy and courage, while the 2.2 kilometres along the promenade sees the cars running flat out at very high top speeds – an incredible spectacle for the race fans on track and the viewers at home.”

Hermann Tilke, the architect behind most new Formula 1 tracks, designed the layout of the circuit.

Baku City Circuit loops around the central and the most picturesque streets of Baku. When it came to selecting the perfect route for the race, the organizers decided to emphasize the panoramic view of the city. Another interesting fact is that the cars will race in an anti-clockwise direction. Overall 30,000 spectators are expected to watch the race live from grandstands located at different parts of the circuit.  The length of the widest part of the track is 13m, and the narrowest width is 7.6m between the 7th and 8th turns, which are situated along Icheri Sheher (Inner City).

The Start and Finish lanes will be located at the Azadlig Square. Moreover, the Formula 1 Paddock, team garages and pit lanes will also be located here. Following the 19th and 20th turns, driver speeds are expected to reach up to 340 km/h as they race along the 1500 meter long straight. 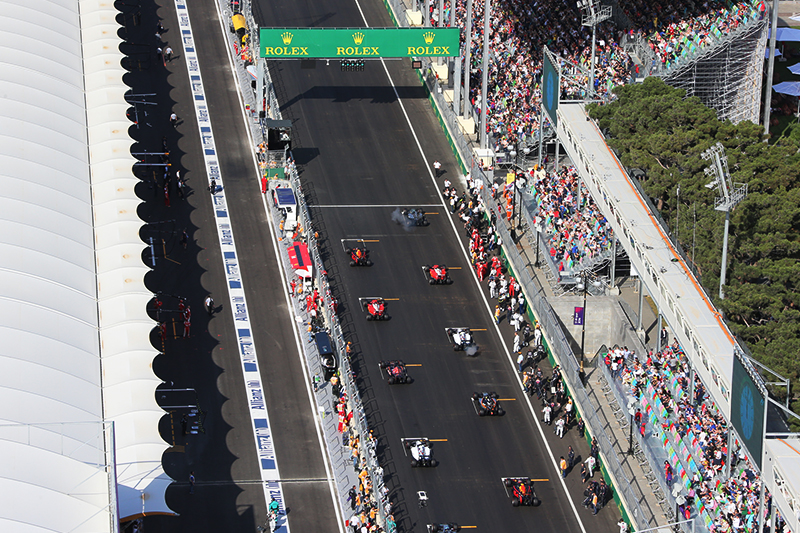 At this point, a beautiful view of the city begins to open up. At one side there is the Government House located directly behind the Formula 1 Paddock while at the other the Caspian coastline stretches along the Baku Boulevard. Following the 90-degree turn at the end of this stretch, the drivers will race for 300m along the street named after the famous Russian poet, A.S. Pushkin.

After the second turn, drivers will head towards a 1km long part of the track alongside Khagani Street, which is considered the second acceleration straight, followed by a sharp turn afterwards.

The first and third turns will allow the drivers to overtake. Having two long acceleration lines is very rare. Following the 3rd turn, the drivers will turn left towards Bulbul Avenue. After proceeding straight 240 m, the drivers will face another 90-degree right turn. The picturesque Sahil garden is located on the left side of this straight line. Then they will turn into Zarifa Aliyeva Street, and negotiate another small turn before reaching Turns 5 and 6, from where they will enter the ‘dual carriageway’ stretch of the circuit, opposite Neftchilar Avenue. 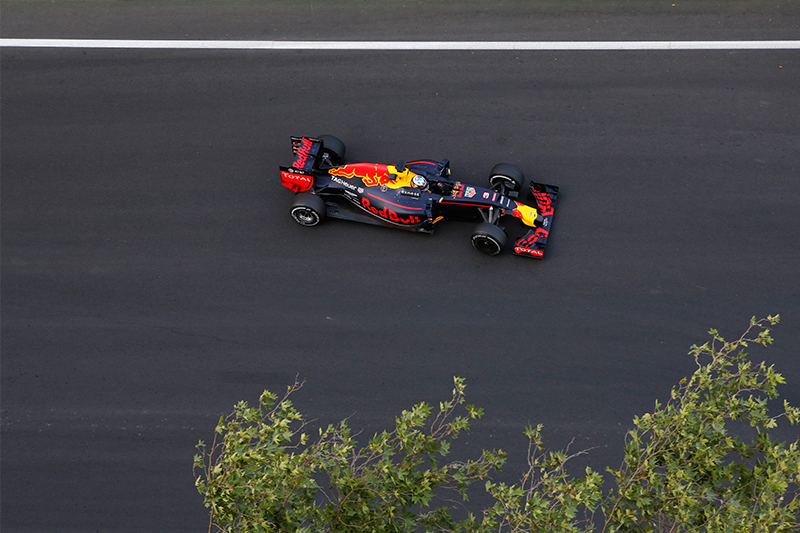 This part of Baku resembles other European seaside cities such as Barcelona and Nice. There are a number of shops, restaurants and cafes here, as well as modern shopping centres and a beautiful coastline promenade. Several grandstands will be located along this part of the circuit.

Next, the drivers will reach the city’s Old Town, Icheri Sheher, and drive along the fortress walls alongside Aziz Aliyev Street. The racecars will pass through narrow streets here, including the 7.6m wide turn 8. 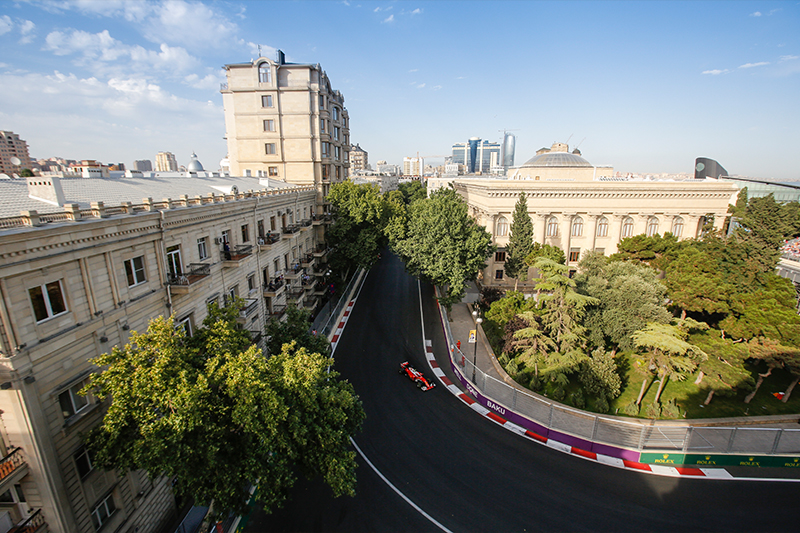 The most challenging part of the track comes after the 8th turn. This part of the city circuit will emphasize some of the most historical architectural landmarks of the city. It is here that the road narrows significantly., as mentioned above, and where the drivers will have to employ all their skill and experience to come through this section unfazed.

The track here will be surrounded by UNESCO-protected Old City – Icheri Sheher, passing its gates on the left side, and the cities residential buildings on the right. A special, temporary asphalt layer has been laid over the cobbled streets of his old section of the city to ensure the drivers can race here. A similar temporary layer has also been laid at Turn 15. 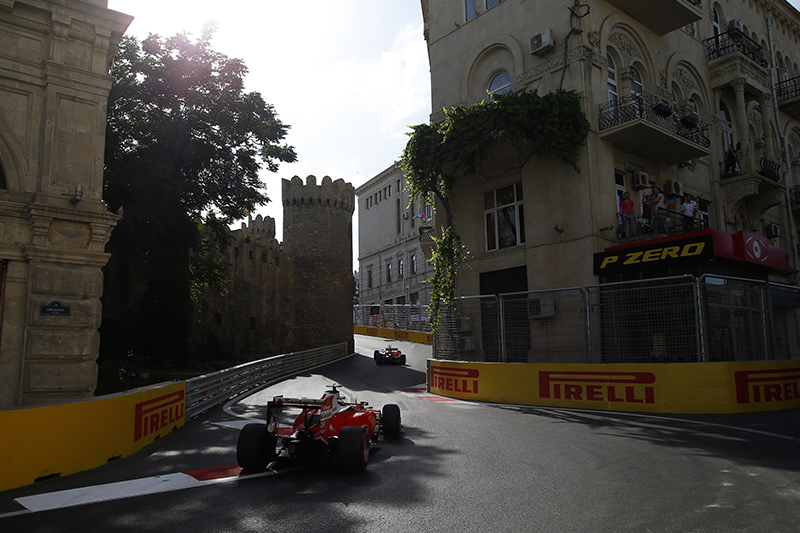 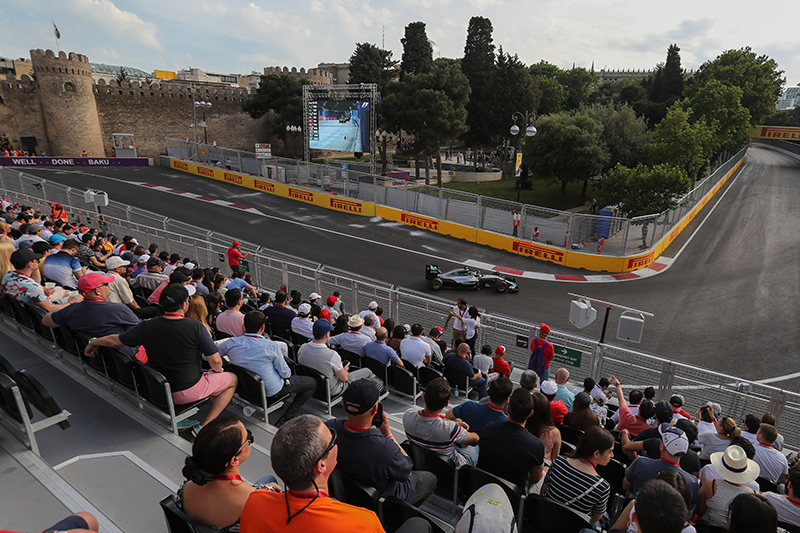 Following this narrow section of the circuit, they will make their way to a wider part of track. The area between the 8th and 11 turns is still located alongside Icheri Sheher, followed subsequently by a more modern part of the city. Here one can see various buildings designed in the nation’s signature style. Drivers will follow the Istiglaliyyat street path between the 12th and 15th turns. As the 13th and 14th turns are rather small angle turns, they will hardly have to hit the brakes to negotiate them.

After the 15th turn they will drive alongside the National Academy of Sciences, and then will make their way towards the Azerbaijan State Philharmonic Hall named after Muslim Magomayev. Following Turn 15, a sharp downhill section, where a panoramic view to the coastline of the Caspian Sea will reveal itself to them, will challenge the drivers’ skills once more. 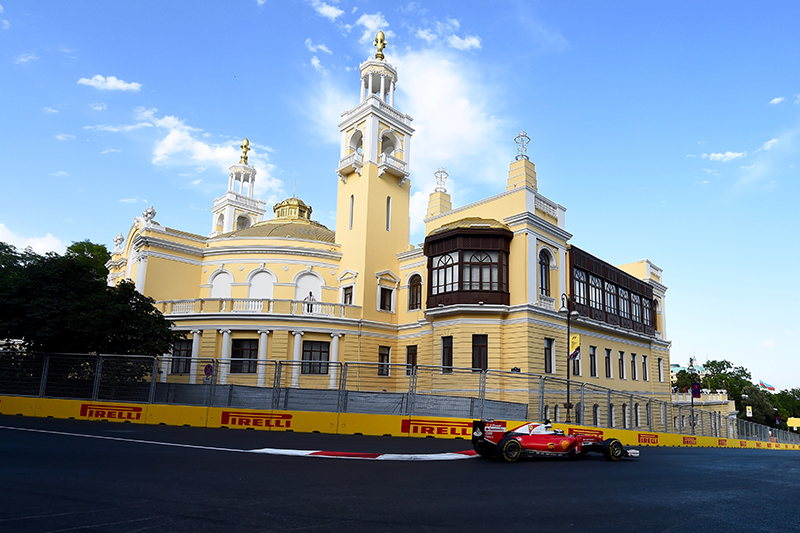 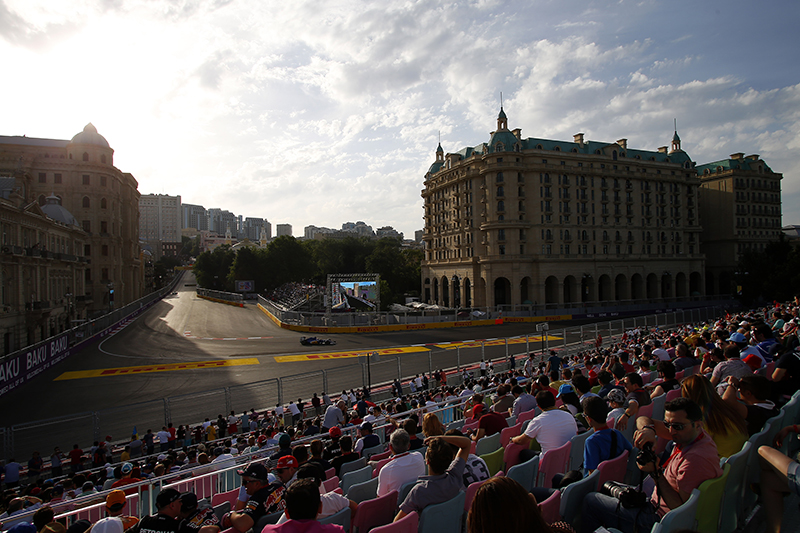 Once they pass Turn 16, the drivers will again speed towards Neftchilar Avenue, passing the city’s ancient defensive structure, the Maiden Tower at Turn 18, along the way.

Once past turn 19, the drivers will hit the 1500m long straight leading towards the Start/Finish Line and return to Turn 1. The racecars are expected to reach a maximum speed of 340 km/h as they pass through this part of the track. 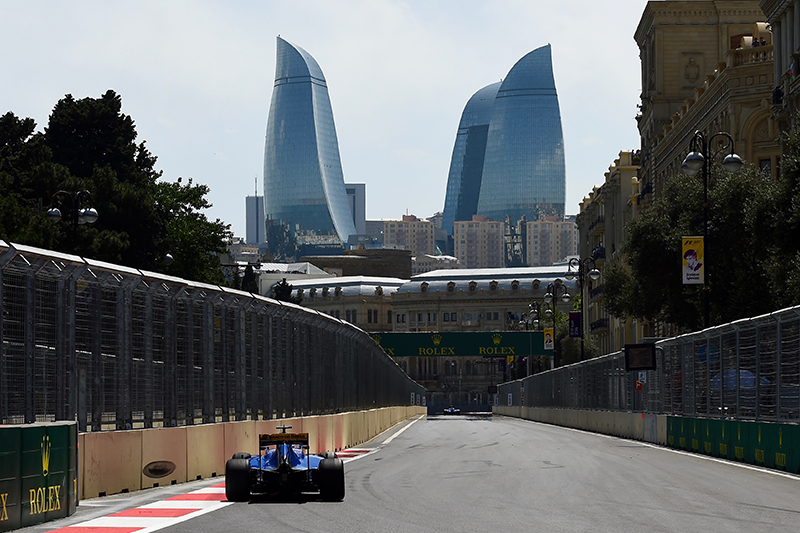